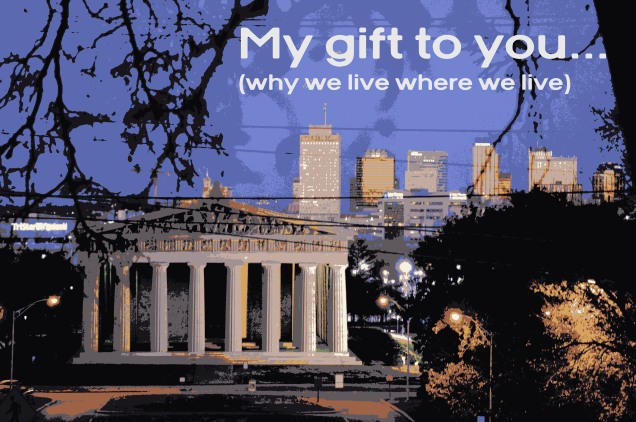 This post is meant to catch you up a little. I’m taking you back to October of 2015 to explain the story of why Tim and I live where we live. We had already sold our house and moved out. We felt like we were supposed to be living in Nashville by the end of the month.

“So what area of Nashville are you guys looking to move to?” People asked us questions like this over and over. These are logical questions but I cringed a little every time because my answer was something like… “don’t really know.” Truth is, we hadn’t even started to seriously look yet. Yep, you heard that right. We were already out of our house, supposed to be in Nashville in less than a month, and we hadn’t even started to look for a place to live. Normally we do a lot of research with any decision. We had driven around a lot of areas, prayed, and looked on Zillow a few times to get an idea of what the market was like. That was the extent of our search though. I don’t know how to explain it except to say that we didn’t feel like God had given us permission to look yet.

There was only one thing that we thought God was telling us to do. We were to drive down in mid-October and sleep in our vehicle until He opened up a door. The closer it got to this time, Tim felt like the 14th was a significant date. So, we set up some meetings with various folks in Nashville on the 14th and the next couple of days after that. We decided to take the pick-up truck with a camper shell. We set up the back to sleep in, packed a few clothes and necessities, as well as some food.

Now that you know the back story…here is what went down. We headed down on Tuesday the 13th to go to an evening meeting at the Nashville Entrepreneur Center. We went about our day, Wednesday the 14th, and worked on things at a coffee shop and met with people until the afternoon. That morning I had briefly looked at Zillow.com. This one apartment that had been posted the day before stuck out like a sore thumb to me because it was in the West End/Midtown area but was literally half the price of the usual rent in that area. It came to mind and I mentioned it to Tim so we decided to stop and at least check it out since it was on our way back towards downtown.

The apartment listed was F3, but they didn’t have that one ready to look at. So they let us into a different building to check out D2. As we walked up to the apartment, there was a young lady outside carving a pumpkin. She kindly answered all of our questions and said there had been quite a few people to come by and take a look. “They go fast here,” she said. It’s an older building and certainly not updated in recent times. We’re not picky so that didn’t matter so much to us, but the apartment that they showed to us was downright gross. I wish I would have taken pictures but I was a little shocked. It looked like it hadn’t been cleaned in years. The kitchen and bathroom were the worst. Just an example, most of the ceiling above the tub was covered in black mold! Not appealing to say the least.

We left and weren’t sure what to think. As we drove away Tim asked me what I thought about it.  I said “Hmmm, it’s definitely jacked, but I still don’t feel like writing it off for some reason.” To which he said, “Well, you usually get a pretty strong sense when we’re not supposed to do something and that doesn’t seem to be the case.” I said, “True.” We decided to pull over into a parking lot to discuss, pray together (and separately) and listen in silence. We did this for quite some time because neither of us could seem to shake this place off. “Lord, what do we do?” While I quietly prayed, one of the first things I said to God is, “This place is jacked up!” You know what He asked me, “Does that really matter?” Uhhh…He got me. I already knew this deep down so I just bowed my head and thought, “No. It really doesn’t.”

We asked the Holy Spirit for guidance and one of the first questions Tim felt led for us to ask was, “Do we now have permission to start looking for a place to live?” We both felt a strong Yes. We started to ask if we’re supposed to pursue this apartment. Over the next few minutes, F3 kept popping into my head and every time it did my heart fluttered. Silently I asked the Holy Spirit if we were to pursue apartment F3 (the one that’s listed)? I got a good feeling about it. I asked about D2 (the one we looked at)? “No, not that one.” “Okay, but we should look around some more though right, because we haven’t even checked out any other options?” “No, that’s not necessary.”

Tim and I discussed what we felt like the Holy Spirit told us. He also felt led to pursue F3 but not D2, except he got the sense that we were supposed to pursue F3 without even looking at it first. I thought… “without looking at it!!! After what we just saw?!” Shew, that was a little tough to swallow. The Lord also told Tim “This is my gift to you.” That helped it go down a little easier. It was still scary if I were honest. We continued to pray, seek, listen, and discuss a little longer. We both felt peace and decided that we should call right away and offer to pay 6 months in advance. A minor detail is that we didn’t have any regular income at this time, which would make getting a rental agreement a little difficult.

We spent the next few days filling out paperwork as they sent it. I half expected to be turned down each time we sent something in, especially the income part. We did everything they asked of us and waited. The next Tuesday, Tim told me they had called and asked us when we wanted to move in! They said we just needed to start by paying the deposit and first month’s rent. We didn’t even have to pay 6 months in advance! I couldn’t believe it! It was such super exciting news…minus the one little detail… that we hadn’t actually seen the place yet (as the other apartment lurked in my mind.) I admit that I was afraid and fully anticipated that I would have a lot of cleaning time in my future.

Tim was in Nashville a couple of days later, got the key, and went straight to check it out. He texted pictures to me and I was so thrilled to see that the tub was white…as well as the ceiling above the tub! Shew….thank you God! He really did give us a gift in this apartment. We never would have imagined living in this area because it is out of our price range. I still can’t believe the view out of our window! One of the biggest, most popular parks in town is across the street. So many things are in walking or biking distance, including one of Tim’s all-time favorite places to research, study, and write…The Vanderbilt Divinity Library. This is an all-around great location for us with much potential.

I have no idea how long we will be in this particular spot, but I am still praising God for this gift to us in this time. He’s such a good Father and the Spirit so faithfully led us to it. This experience caused me to trust Him even more than I did before. All I can say is, we could have never picked a better spot if we had tried to on our own. I’m so grateful! This neighborhood has many different types of people including college students and professors, homeless, hospital workers, white collar, young professionals, tourists, and more! We love it! Also, I feel that God gave us this view to keep our mind on the city at large. Many times it has spurred me, as I look out of the window or sit on the front porch, to pray for the city of Nashville. What are you doing here, God? How can we join in? Can’t wait to see!

Pictures from our window…